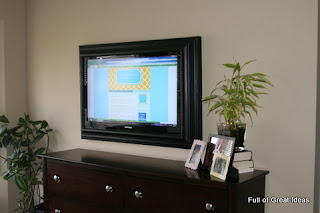 Although this amazing project was completed during my $0 budget month, we did plan for it and purchased all the materials a couple of months ago. The materials cost approximately $35, but if you hunt around or have leftovers from putting up crown molding it could cost your far less.  I will let you decide if this was cheating on the budget, but for this month I spent $0 on the frame. Since the goal was to finish projects and to use the stuff I had, I think I stayed with in my goal :o).

At Christmas, my husband and I decided rather than buying gifts for each other, we would splurge on a TV for our bedroom (42 inches for those of you wondering how it would look on your sized TV). I know there are some of you out there that are gasping and thinking "You should never put a TV in your bedroom!" I respect your opinion but I do like to lay in bed at night and watch TV.  Plus with 2 kids in this house, the moment the TV turns on in the family room, they come running and take control over what we watch. If I don't have to sit through another Hanna Montana again, I would be overjoyed.

When we purchased the TV, I made sure the one we bought had the controls on the front. Although this does not matter with modern day remote controls, I like to be able to turn the TV on and change the channel/volume without having to hunt for a remote control that is always misplaced.

I only agreed to put a TV in our bedroom because I knew that I wanted to frame it so it was less obvious. I didn't want to walk into the room and that be the one thing that you see. So I agreed to get a TV and my husband agreed to make me a Flat Screen TV Frame.

I will admit I did not participate in the making of this; I helped design it but I did no physical labor in its production. This is 100% my husband's beautiful handy work! 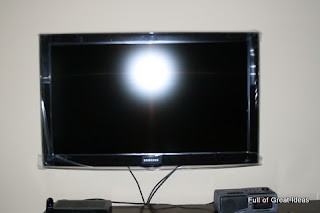 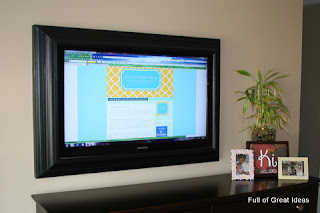 Materials:
Method:
We (from here on out we is really my husband :)) hung the TV on the wall with a 'flush mount' bracket. This mount does not swivel or tilt, but this is what we wanted since our bed is directly across from the TV. Once mounted, there was only an inch or two of gap between the TV and the wall. 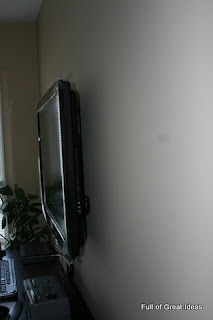 We cut two hole between the studs in the drywall (one behind the TV and one at the electrical outlet height) and dropped all the cables through. We used a special plate/kit made specifically for this, but it really is not necessary since ours is hidden by a dresser like ours. 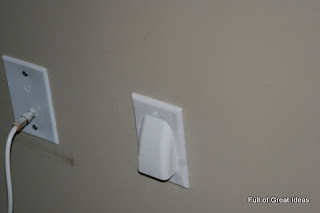 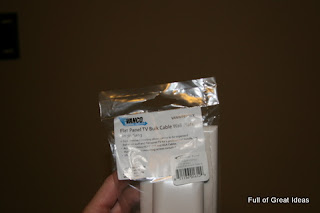 We measured the exact width, height and depth of the TV. I would give you my measurements but this will vary for every TV and it won't help you. 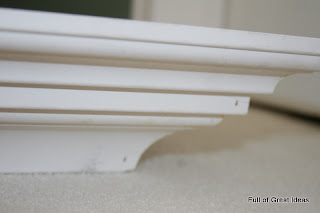 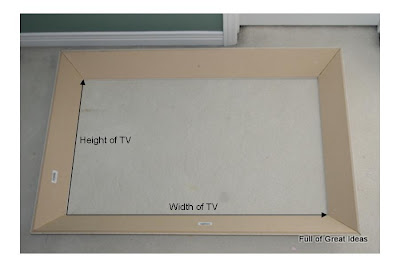 We placed it over the TV to determine how much of a gap remained between the frame and the wall. We had a 2 inch gap so we used a piece of 2x1 flat trim molding to make the frame fit flush against the wall. Again, we used small nails and wood glue to secure the pieced together. 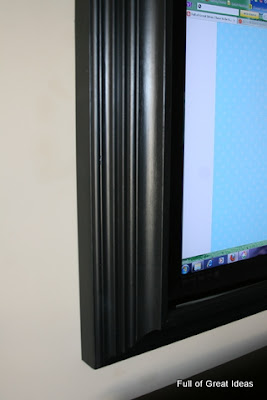 After the frame was fitting flush against the wall, we noticed we had a slight gap (on the inner part) that you could see between the TV and the frame, so we used a small piece of trim molding on the inner part of the frame to hide it (looks like quarter-round but it is curved in rather than out).

We filled in all the holes with wood fill and used caulking to hide seams. After giving the entire piece a light sand, we painted it the same black paint we used for our kitchen table. Three light coats later and it looked amazing!

In order to allow the heat and sound to come out from behind the TV, my husband removed approximately half of the 2x1 molding on the top and bottom of the frame using a router. You cannot see that the wood has been removed unless you bend down and look at it from underneath, but it does allow the TV to vent (these TVs produce a great deal of heat). I am sure you could drill a few big holes in the top and bottom too and that would allow the heat to come out.

We used picture hanging hardware to secure it to the wall. The hanging brackets were attached to the piece of 1x2. This frame weighs hardly anything since it is made of MDF but if you do this with real wood, be sure to use hangers that can hold the weight. 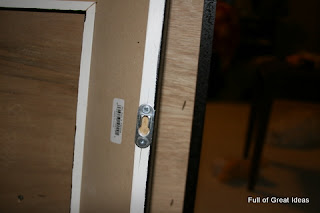 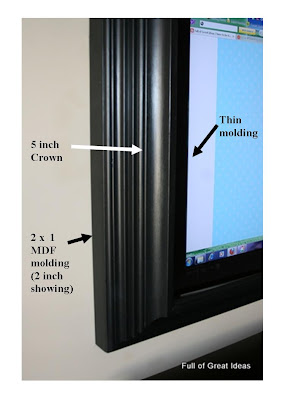 And here it is, the end result again:

I still have not decided how to decorate around it. We did not center it above the dresser because I wanted to do a collage of pictures to the one side...however, it is far bigger than expected and I might just have to leave the plant for height.


Any suggestions on how to decorate this?

Oh and in case you are wondering, we do have a computer connected to the TV. My husband is an Electrical Engineer so every TV in our house also doubles as a computer monitor.

Look what I found with a little googling...a Pottery Barn version available for a crazy/ridiculous price.  I guess I create a Pottery Barn knock off their TV frame Chadwick without even knowing it :) 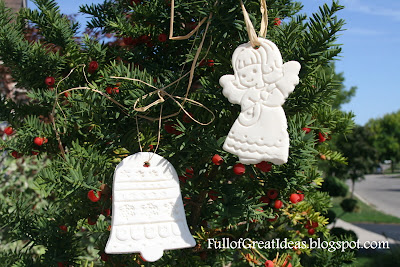 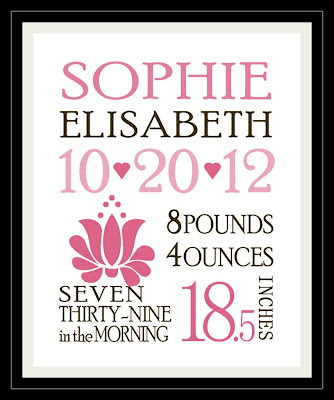 Stephanie
I am a mom to two beautiful children and a wife to a wonderful husband. I am a full-time mom and a part-time project manager. I would love to say this blog is a hobby but I really believe it is my way of having something to call my own